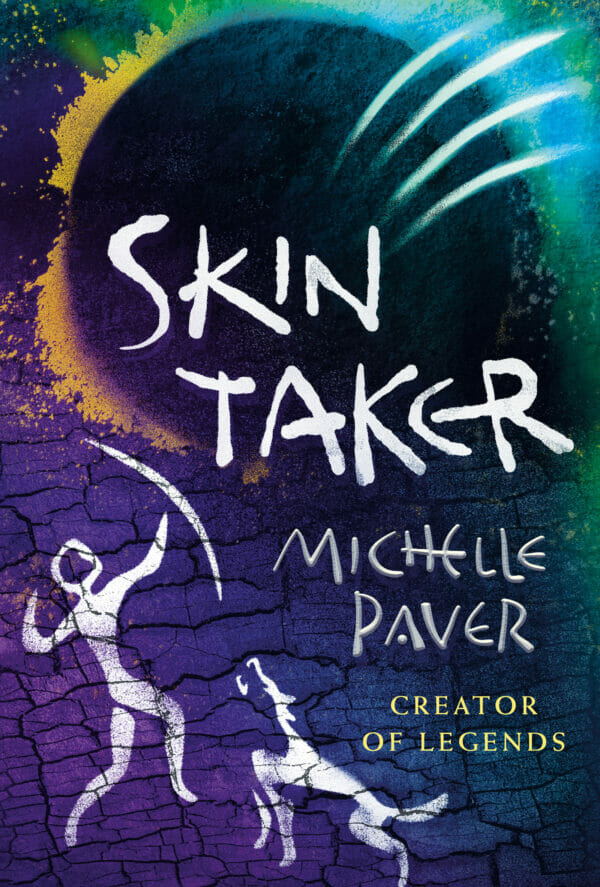 In the Dark Time of midwinter, disaster strikes the Forest. Chaos rules. Bears woken from their dens prowl the shadowy valleys. Desperate clans battle for survival. Only demons thrive.

With their world in turmoil, Torak, Renn and Wolf are tested as never before. And as a new evil haunts the devastated land, Torak must risk his sanity, his life and even his souls to save everything he loves…

Skin Taker carries you back to the Stone Age, to nature, drawing you deeper into an astonishing environment and adventure which began with Wolf Brother and has captivated millions of readers.

The world of Torak and Renn is that of six thousand years ago.  That’s after the Ice Age, but before farming spread to Scandinavia – when the land was one vast Forest.

The people looked like you or me, but they were hunter-gatherers.  They lived in small clans, some staying at a campsite for a few days or moons, others staying put all year round.  They didn’t have writing, metals or the wheel – but they didn’t need them.  They were superb survivors.  They knew all about the animals, trees, plants and rocks on which they survived.  When they wanted something they knew where to find it, or how to make it.

Like the previous books in the series, Skin Taker takes place in northern Scandinavia, so the wildlife is appropriate to the region – as are the seasonal changes in the hours of daylight.  However I’ve changed mountains, rivers and coastlines to suit the stories, which means that you won’t find the specific features of Torak’s world in a modern atlas.

I got the idea for a meteorite hitting the Forest about five years ago, when I was starting to think about the three books which would become Viper’s Daughter, Skin Taker and the forthcoming Wolfbane.  I wanted to write about the effect of a worldwide disaster on Torak and his people.  I had no idea that by the time I finished writing Skin Taker, most of the world would be in lockdown, battling the threat of Covid-19.

To gain insights into how Torak’s people perceive the meteorite strike, I’ve studied eyewitness accounts of the Evenk people of the remote Tunguska region of Siberia, which was famously blasted by a meteorite in 1908.  These reindeer herders’ accounts were written down decades later, but they retain the freshness of indelible memories.

I’ve often been in the Arctic during the winter darkness, but for Skin Taker I reminded myself of what it’s like by visiting Kirkenes in the far north of Norway in January 2020.  I then travelled by Hurtigruten down the coast of Norway to Bergen (little knowing that within weeks this would be impossible, thanks to the coronavirus).  Apart from immersing myself in a world of snow, ice and false dawns, I took a starlit ride on the shaggiest Icelandic horse I’ve ever seen, and from the ship’s top deck I saw the First Tree several times, including on one memorable night when a meteor shot across the sky behind its shimmering green lights.

My 2016 research trip to Haida Gwaii in British Columbia and to Alaska gave me all sorts of inspiration for the story.  Naiginn’s bear-clawed gauntlets are based on the shamanic regalia of one of the First Nations of the Pacific Northwest, and his bear-claw circlet is based on that of a Tlingit shaman.  The Kelp Clan’s narrow heads were inspired by the traditional practices of the Kwakwaka’wakw (formerly Kwakiutl) and Coast Salish people.  A young Inupiaq man in Alaska told me about the bear trap formed from a spiked strip of baleen, which Naiginn uses to lethal effect.  (I read somewhere that the Sami traditionally used something similar to kill wolves.)  More benignly, the young man also described times when he’s out on the winter tundra and the Northern Lights shine so brightly they turn the snow green.

Bushwhacking trips in the rainforests of Alaska, notably on Baranof Island, furnished me with details for Torak’s bear-tracking – although luckily (and unlike Torak), my companions and I didn’t come across a bear kill.  I did, though, crawl into a grizzly bear’s den, complete with two side-chambers for the cubs.  Of course the grizzly wasn’t home, but fresh tracks, piles of dung, and scratch-marks on tree-trunks told us it wasn’t far off.  That lent an interesting flavour to our hike.

Still on bears, the episode when Torak bumps into a bear on a foggy river is based on the experience of an intrepid young Norwegian hiker whom I met on a trip to Malangenfjord in 2015.  The same young woman also told me of a separate incident when she’d scared off a bear from entering her tent with a puff of pepper spray; I substituted earthblood when this happens to Dark.

Concerning caves, I’ve been down lots of them for previous stories in the series, and each one has given me fresh ideas.  For Dark’s forays underground in Skin Taker I spent an unforgettable day down Clearwell Caves in the Royal Forest of Dean, Gloucestershire.  The Caves have been mined for over 4,000 years for iron and ochre (that’s the soft mineral ferric oxide – or earthblood, as the clans call it).  I was lucky enough to be guided by Jonathan Wright, who runs the caves, and whose family have been freeminers for centuries.  In addition to the beautiful and sensitively presented show caves, Jonathan took me into the Deep Levels of Old Ham Mine, to a depth of about 200 feet, all of which gave me ideas for the story too numerous to mention.  Highlights included seeing (and clawing at) veins of red, yellow and purple ochre in situ in the cave walls; drinking astonishingly pure water from a flowstone pool; and learning of the miners’ clever traditional light-holder, or “Nelly”, made from a stick and a ball of clay.  I also experienced the disorientation of utter darkness and silence deep underground; and I belly-crawled through a tunnel so impossibly small that I only plucked up the courage to go in because Jonathan had gone before me and I’d have been ashamed not to give it a try.

As for wolves, I was a patron of the UK Wolf Conservation Trust since WOLF BROTHER came out in 2004 until it closed to the public and the wolves went into well-deserved retirement in 2018.  The wolves’ different characters continue to provide inspiration for the stories.

We use cookies to ensure that we give you the best experience on our website. If you continue to use this site we will assume that you are happy with it.OkRead more